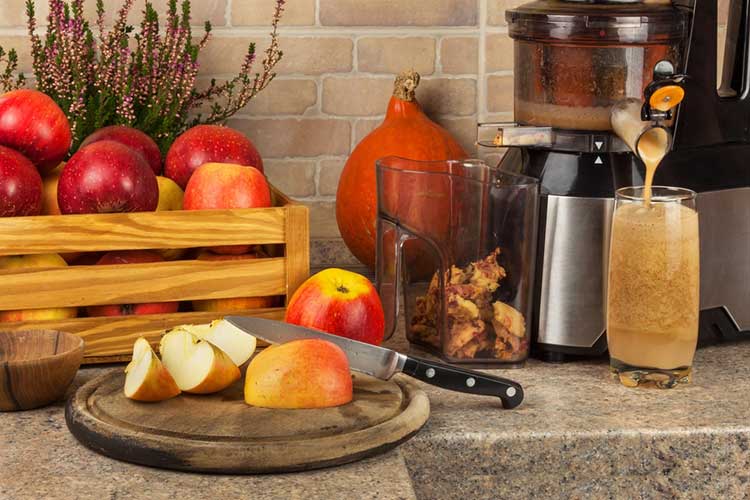 Apple juice in the morning is one of my favourite ways to start the day, a nice crisp cold refreshing glass, bliss.

But what’s even better is if it’s been homemade!

Fortunately, making apple juice can be really easy, I want to show you the three recipes you can use to do it, the easy way, with a juicer, the not so easy way, with a blender, and the really annoying way, boiling it in a pot.

All three are very possible and easy enough to do but with a juicer is definitely my favorite, it’s the quickest easiest and freshest way to make apple juice.

But before we get into those different recipes I’ve recently been looking at all the incredible health benefits you can get from fresh apple juice.

You can read up on this in more detail in another article if you’re interested but here’s a quick rundown.

Keeps your Heart Strong – Apple juice has been shown to lower your risk of heart disease and cardiovascular problems. It also helps you get rid of bad cholesterol and better store the good cholesterol keeping your heart healthy.

Prevents Alzheimer’s – Apple juice can help improve memory and improve brain function while helping to prevent a brain plaque from occurring which is what is currently thought to cause Alzheimer’s.

Improves Lung Capacity – It also helps prevent and lessen wheezing in people with asthma, but for those who don’t have asthma it can increase lung capacity which helps give you more energy and can improve sports performance.

All from drinking apple juice, pretty cool right? Now let’s see how you can make it so you can start getting these benefits.

Apple Juice Recipes – Make Your Own At Home 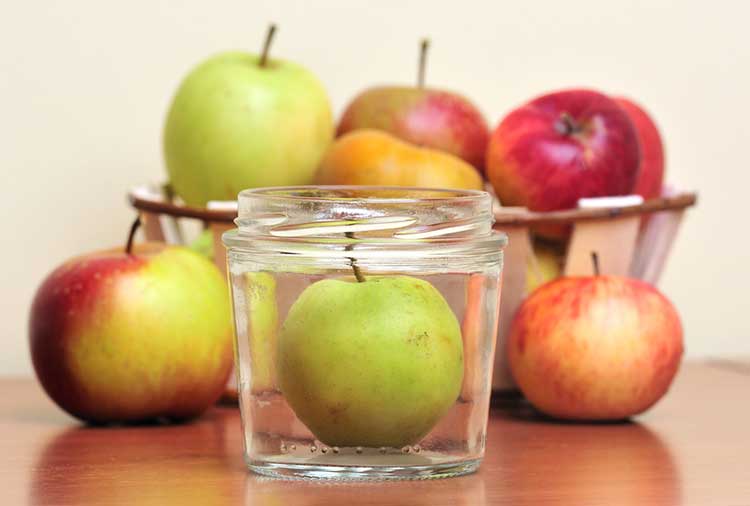 Now, these three different apple juice recipes all start the same way, washing and cleaning, so I’ll talk about that and then go into the details of each method. So whether you’re making apple juice with or without a juicer here’s where you start.

Either way, you’re not going to be peeling the apples and you don’t know what bugs or chemicals have been on them while they were growing so you’re going to want to wash them first.

Washing them is nice and easy though, just put each one in some cold water and wipe it down with your hands, running water is even better so everything that comes off them gets washed down the sink.

You don’t want the seeds to be juiced, otherwise an apple tree might start growing in your stomach! At least that’s what my mum used to tell me…

Jokes aside, you really don’t want to be eating apple seeds, when they’re broken up a chemical called amygdalin gets released which gets turned into cyanide! And while your body can detoxify small amounts of it and you’ll be fine large amounts can become poisonous. So best just to core the apples and avoid any risk whatsoever.

Then you just want to chop it down into quarters so you’ve got smaller well-sized pieces.

Apple Juice With A Juicer Recipe

So we’ve got clean apples that have been chopped up dying to be made into juice, let’s make it happen!

I prefer using a juicer as I’ve said before, it’s just really easy because you put the apples in the top and juice comes out the bottom without any problems. But you need to get the right juicer to make it properly, you want a masticating juicer that can make it without losing any of the nutrition and you want it to be powerful enough to crush a fresh crunchy apple.

And in my mind, no juicer does that better than this Omega juicer which you can buy at Amazon.

Really easy, you just have to put the apple pieces in the opening with two containers underneath, one to catch the juice and another to catch the pulp.

And that’s it, didn’t I tell you it was easy?

Now you can drink a delicious glass of apple juice that’s as fresh as it can be.

Apple Juice In A Blender Recipe 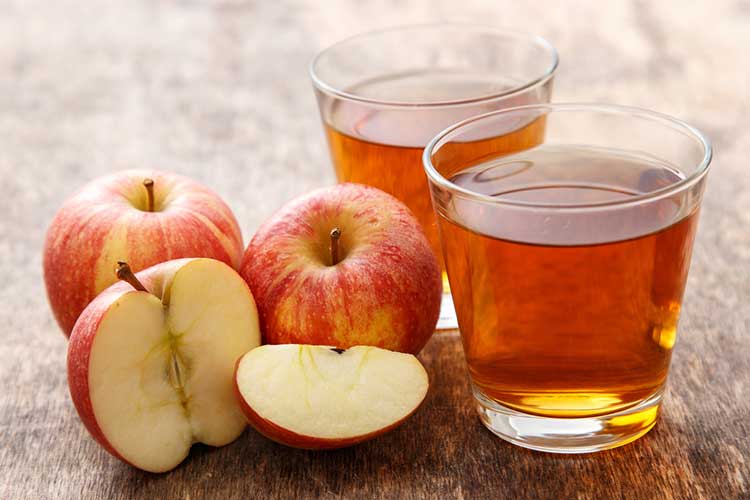 In a blender things get a little bit tricker, because you’re going to end up making apple smoothie if you follow the same instructions as above. But not to worry, where there’s a will there’s a way.

Nice and easy, just take your water and your apples and blend them together, go for about 45 seconds to a minute depending on how strong your blender is, ideally you want to blast it in a Vitamix for 45 seconds.

Step 2. Strain Through A Nut Bag

You can use cheesecloth here, or even muslin cloth but a good nut milk bag like this one is just perfect, it catches all the apple pulp and lets you squeeze every last piece of juice out from it.

And then you’re ready to drink!

Apple Juice In A Pot Recipe 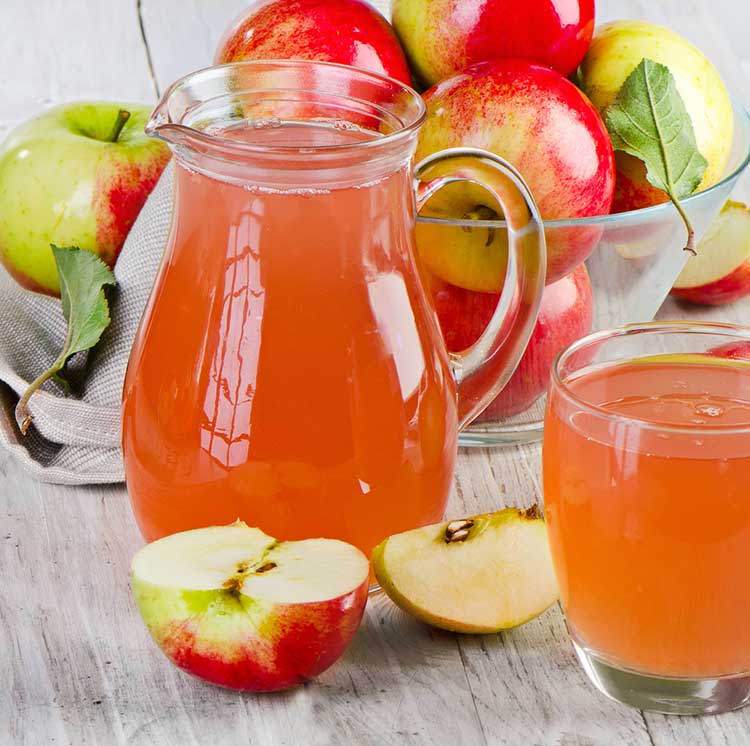 This method I actually found on Pinterest, it never would have occurred to me to make apple juice by boiling the apples in a pot but turns out you can! So I thought I’d share the method here too, it definitely isn’t the quickest or the easiest but most people have a pot so it’s very accessible.

You want to add the chopped and washed apples to a pot and cover with just enough water to cover them and no more. Too much will dilute the flavor and it’s a lot easier to add more water later than it is to take it back out again!

You then want to simmer them for about 20-25 minutes to release all the flavors inside and get them nice and soft.

Step 2. Push Through A Sieve

You can use a nut milk bag for this too but it’s a lot easier with a sieve purely because the contents are hot.

Pour the mixture through a sieve and push down the apples with a spoon to squeeze out all the juice. If this does let some pulp through you can always put it through a nut milk bag after.

Then let it cool, get it in the fridge and enjoy!

You can also freeze this juice into airtight containers if you want to keep it for longer since it makes quite a lot. It doesn’t taste as nice after it’s been frozen compared to a fresh apple juice but it’s an effective method for bulk making apple juice.

Now let’s finish off with a few of my top tips for making apple juice, these all apply regardless of which method you choose to follow.

Use 2 Different Types Of Apple

This just really mixes up the flavour of what you’re making, so if you’ve picked a whole load of green apples you could head to the shop and buy some red apples just to mix together and change up the flavor.

If you don’t want to buy apples precisely because you’ve picked your own fair enough! It’s just a way to change it if it gets a bit samey.

Get yourself some nice clean glass bottles that fit in your fridge like these ones that you can keep your juice in. Out of a masticating juicer fresh juice lasts about 3 days, in a blender, it only lasts about 24-48 hours while the pan method can last you 3-5 days.

This is, of course, assuming you keep it in the fridge which you should be! In the freezer, it can stay good for about 3-6 months, but generally, 3 months is the maximum.

Sometimes fresh homemade apple juice can be a little bitter tasting, if so you can stir in a little sugar to the glass or even better juice a lime into it as well for a bit of sharpness and a nice sour taste. Or if you’re feeling brave a little ginger can be a nice addition to an apple juice!