You’re reading down the recipe and come to “juice of one orange” but you’re left stuck not wanting to buy a bag of oranges when you’ve got orange juice in the fridge already right?

Or for whatever other reason you want to know how much orange juice is in one orange don’t worry I’ve got you covered.

And I won’t go into “it depends yadda yadda” because I’m sure you already know that, so let’s dive in and find out how much juice is really in one orange. 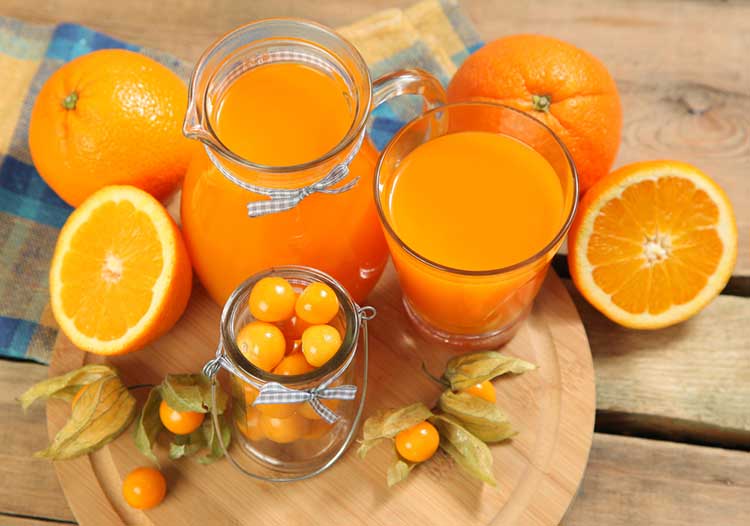 How Much Juice Is In One Orange

One orange will get you about a third of a cup of orange juice, which is about 75 ml or 5 tablespoons. Could be a little more if you’ve got a big juicy orange, could be a little less if you’re juicing it by hand rather than with an electric juicer.

But it’ll be round about a ⅓ cup and if you go with that in a recipe I’m sure you’ll get on OK because fortunately, if the recipe asks for the juice of one orange then it doesn’t need an exact amount to the milliliter because juicing an orange isn’t an exact science and the amount you get will vary between oranges.

Which brings me on to the next point of which type of orange actually gives the most juice.

Which Oranges Give The Most juice

If you’re wanting to get the most juice then you’re going to need one of the best oranges for juicing which in this case is going to be a Valencia orange.

Valencia oranges are in season 9 months of the year from April to December and are the commercial standard for drinking orange juice. They’re big, they’re juicy, and generally really widely available so you can pick them up cheap.

In the height of summer they can go a little green on the outside but don’t worry about it, they’re still ripe, they just do this to protect themselves from the sun.

These will give you a ⅓ of a cup or more of juice while navel oranges and other varieties will be more like ¼ to a ⅓ cup.

But if your recipe calls for the juice of one orange without being specific then you’ll get on fine with a 1/3 cup or 5 tablespoons as your guide. You can always taste what you’re making an add a little more if needs be. Likewise, you can start with less if a 1/3 cup seems a lot relative to what you’re making.

Tips For Getting The Most Juice Out Of Your Orange

Warm it First – Fruit tends to be less juicy when it’s cold, so to get the most juice out of your orange, especially if you’re juicing it by hand, you’re going to want to warm it a little.

You can do this by rolling it around in your hand, or prick the skin with a skewer and put it in the microwave for about 15 seconds. The microwave method works a little better but it isn’t necessary by any means, it just makes life that little bit easier when it comes to juicing it. But either way the aim is to just warm it up to get the juices flowing so they come out easier.

Get an Electric Orange Juicer – Of course if you’re doing it by hand there’s only so much you can do, but with an electric orange juicer you get twice the juice at a fraction of the effort, you just put it on the juicing cone, push the lid down and it spins away getting every last drop out of it.

Manual orange juicers still have their place of course, they’re fast and they save space by fitting inside a drawer rather than taking up space in a cupboard. And you can pick one up for about $10 while an electric orange juicer, believe it or not, can actually set you back over $100!

How Many Orange in a Glass of Orange Juice?

For a glass of orange juice you’re going to want to allow for 1-2 lbs of oranges, but it depends on how big a glass you want, I go by 250 ml as a good glass size, since if you’re supposed to have 8 glasses of water a day then 1 glass will be 250 ml.

So if one orange has 75 ml then you’re going to want to get 4 oranges to make up a glass of orange juice.

But again it depends, if you’ve got nice big juicy oranges and an electric juicer then you’re only going to need to use 3 oranges but if you’re doing it manually then it could take 5 oranges or even 6.

There you have it, everything you need to know about the juice of an orange, I hope you found this useful and if you have any other questions please ask them below and I’ll be sure to answer them, I might even update the article if they’re good enough, or they might end up getting an article of their own!

But to sum up, the rule of thumb is that one orange will give you about a 1/3 of a cup of orange juice which is equivalent to 75 ml or 5 tablespoons. But if the recipe hasn’t told you exactly how much orange juice you need then I’m sure you’ve got some wiggle room so don’t worry too much about exact amounts. And if you’re making your own orange juice you’ll want about 4 oranges to get a glass of juice.