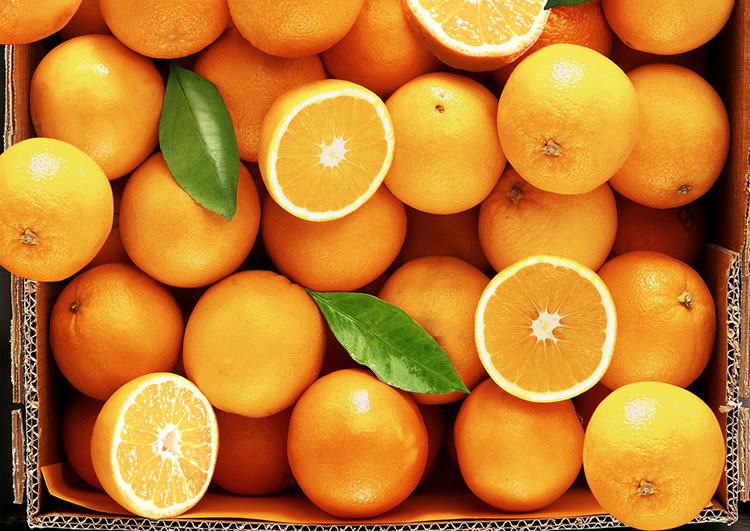 There’s just no comparison between freshly squeezed orange juice and store-bought orange juice, but do you know what makes it taste even better?

When you’ve got the best oranges for juicing.

All oranges are not created equal and some are best for eating, others for cooking but the best for juicing are, well, juicy, sweet, and don’t have too many seeds.

Speaking of seeds, what do we want to do with them?

Orange Peel and Seeds, On or Off?

The peel you want to leave on if you’re crushing your orange juice because the peel won’t go into the juice if you’re using a juicing machine however you’re going to want to peel it before you juice it.

Orange peel can leave your juice with a bitter taste and if you peel it, it means you don’t have to wash it which saves some time.

Seeds, however, are a little different, because in an orange the seeds contain limonene which when exposed to air makes your orange juice taste bitter. So if you’re going to be making orange juice in a juicing machine you’ll want to try and take as many seeds out as you can.

In a citrus press, you’ll be just fine because the seeds just get caught in the pulp catcher and don’t get crushed or put into your drink.

Another quick note on limonene is it’s present in the flesh of navel oranges but we’ll get to that later. 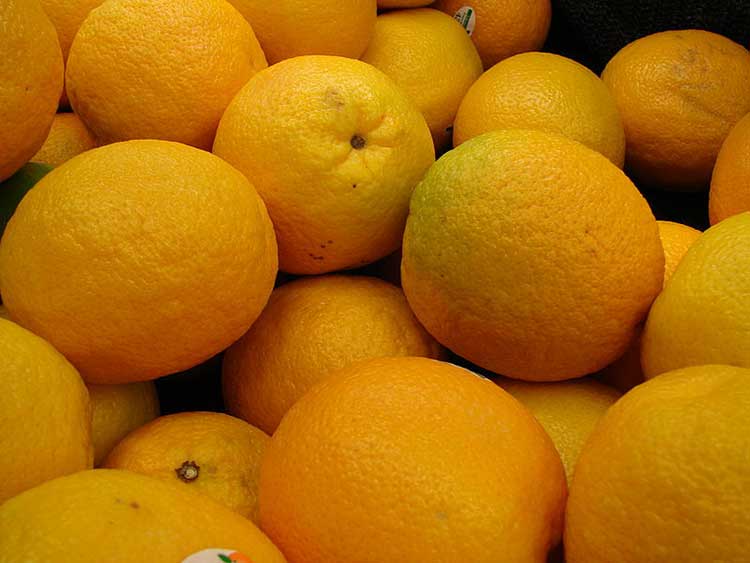 Valencia oranges are robust almost year-round oranges that have a sweet taste are full of juice and only have a few seeds inside, typically 9 at an absolute maximum. They’re what most commercial orange juices are made from and they’re in season from April through to December.

So you’ve only got that January to March period where you can’t get fresh in season Valencia oranges. And you’ve also got midnight valencia’s which are a seedless variety though they’re less common.

Sometimes during the hot summer months valencia oranges regreen which is where the peel goes slightly green to protect them from sunburn, don’t be fooled they are still ripe and still tasty, they don’t lose any juice or any goodness just change color on the outside. In short, the orange juice will taste the same. 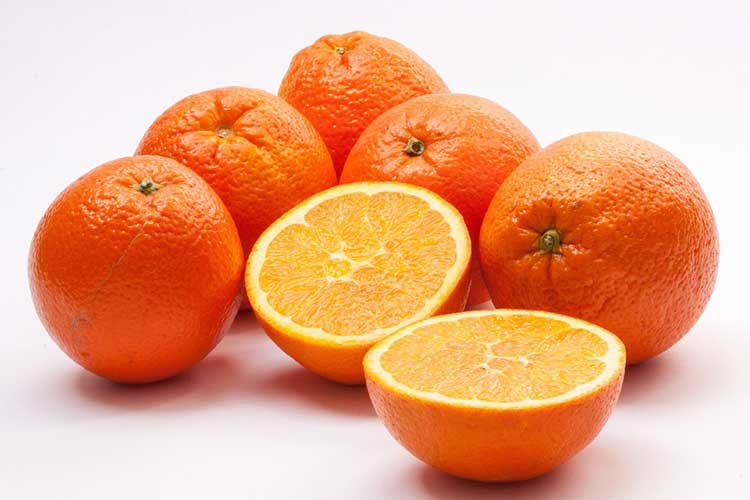 Navel oranges are often the go-to at-home juicing orange but as I said before they have limonene in the flesh rather than the seeds.

This means that as soon as you juice them they start getting bitter, it takes a few hours before you notice but it means they’re only good to juice and drink immediately, you can’t make batches of juice and keep it in your fridge or freeze it.

But the main advantage of Navel oranges is there are no seeds, so you can juice away without having to pick anything out and they’re great inside a juicing machine.

Still, navel orange juice is some of the best you can make. They’re in season December through April so cover the off-season of the Valencia orange. 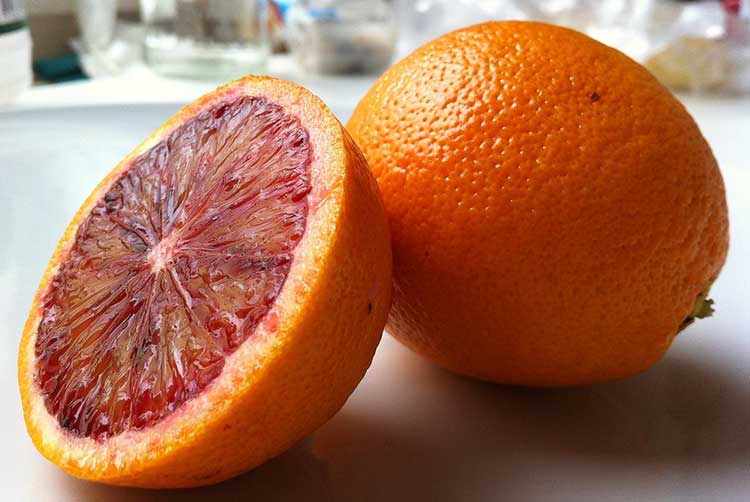 Blood oranges are fun to juice because of their distinct color and they’re highest in antioxidants making them the healthiest orange you can juice!

Ripe from mid-January through to April blood orange juice tastes like afresh spicy orange flavor with a great aroma that’s unique amongst oranges. While blood oranges aren’t the cheapest they’re probably the most fun to make juice with, or a nice addition to mix in with other types of orange or citrus fruit.

Not your everyday juicing orange but a nice one to try. 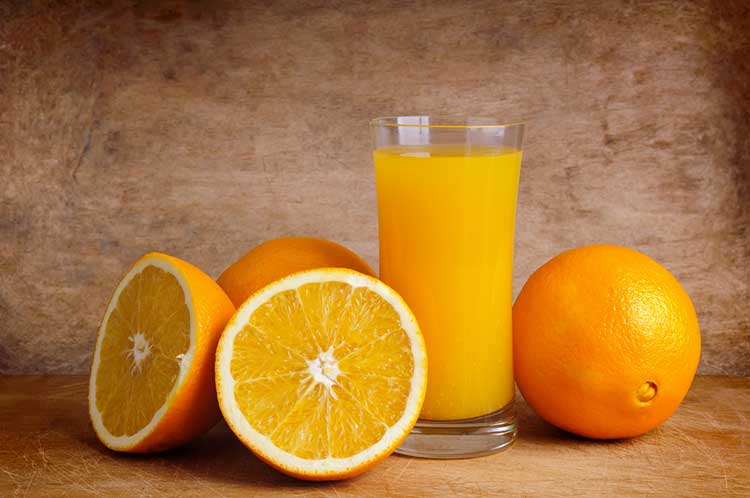 Or I should say homemade orange juice because the difference between the stuff you make at home and what’s bought in store can be chalk and cheese.

If you buy the expensive organic store stuff it might be ok but even then it’s been preserved and bottled so you’re better off making your own.

Bottled orange juice is preserved either by adding chemicals or pasteurizing it which kills off any of the healthy enzymes that might be inside. Plus it can have added sugar and maybe even additional flavorings which you certainly don’t want to have inside you.

Delicious orange juice you’ve made at home, however, is nothing but just that, the juice of an orange, this leaves you with all the enzymes and the antioxidants like vitamin C which as I’m sure you’re aware is great for your immune system.

But did you know it also helps protect your skin from UV damage? Ideal in summer or any of the hotter southern states

I’ve got a separate article all about making freshly squeezed orange juice, that is worth checking out but I wanted to share a few of the top tips here as well.

Add Pulp After – It depends what type of juicer you’re using but to me, it’s best to juice it so it’s smooth and catch all the pulp, then if you like the bits you can add it in after you’ve finished. Remember it’s easier to put pulp in your fresh orange juice than it is to take it out so add sparingly and stir before putting more in.

Peel It With A Knife – If you’re going to be putting your orange in a juicer then peel it with a knife instead of your hands, this makes sure all the white pith is removed from the outside which doesn’t have any juice in it and just makes a mess inside the machine.

To do so, cut the orange in half and put it flesh side down on the chopping board then make small cutting motions from near the top down to the counter following the curve of the orange, repeat around the whole thing then chop the top off.

Drink As Soon As – Generally it’s good for about a day especially if you’ve used Valencia oranges, but if you’ve used an orange juicer like one of these I recommend then your juice will last 2-3 days in a container in the fridge. Or you can freeze orange juice it of course in which case you can keep it for 3-6 months. But the sooner you can drink it the better it’s going to be.

Other popular varieties of Orange You Can Juice

The three types of orange above are the most popular varieties when it comes to juicing but here are some other good options you can try.

These are small oranges and generally they’re good if you can’t stomach a normal orange. Some people can’t digest normal oranges very easily and if so juicing tangerines will be perfect for you.

What’s fun is tangerines have more usable vitamin C in them than oranges! So if you’re looking for an immune system booster then tangerines are going to be a great choice

A little more of a sweet and tart flavor and should be stored in your refrigerator to keep them fresh. Available from November to January so known as a Christmas orange.

Clementine oranges are the smallest type of fresh orange so they’re not great for juicing because you have to juice so many of them to get a glass of freshly squeezed juice. But, they are a sweet orange so the sweet flavour can be really special even though you need the extra work.

What is big pus about clementines is that they’re seedless, so you don’t have to work very hard to get them through a juicer. Best used with an orange juicing machine.

Available in the winter months November till April so a great choice of winter orange juice.

Mandarins are a bit bigger with a milder flavour but they’re nice and easy to peel so if you don’t want any peel in a juicing machine these are ideal.

The mild flavour is a good choice if you are trying to keep everybody happy. In season from November till April.

Not as sweet as a mandarin but they do have a light citrus flavour that can be interesting. What’s most fun is juicing all the different types of orange at the same time and seeing if you can tell the difference.

but no matter what you choose they are a great way to bring a little Florida sunshine into your home.

In season mid-November through to February Satsuma oranges aren’t one of the best oranges for juicing because of the small size but if they’re what you have then juice away. They still make a delicious juice after all.

Conclusion on the Best Oranges for juicing

In my head it’s still the Valencia orange that wins as the best orange for juicing. It’s the juiciest and the most readily available but don’t be afraid to experiment, get whatever oranges are available where you are and give them a go, you might find your favorite.

p>Blood oranges make a really unusual color and flavor of orange juice so are worth trying. But whatever fresh orange juice you do decide to make I hope you enjoy it! Juicing oranges is fun and delicious, especially if you can get them fresh.

Not all oranges should be juiced. Seville oranges are sour and definitely don’t make a nice juice. They’re much better for marmalade. And don’t forgot your oranges can be eatne fresh not just juiced. The sweetest oranges make the most widely liked orange juice but a slightly tart flavor can be really delicious and unusual. A few tangerines or a tangelo can go a long way to making a unique juice.