You’ve got your juicer, your excited, you get it all set up, you’ve decided that you want to start with apple juice, you pick up the apple and…

What are you supposed to do it with it? Should you peel it? Do you take the core out so you don’t juice any of the seeds? And how the heck do you clean the apple before juicing?

Well I’ve gone into more detail in the article but the long and short of it is that you don’t need to peel them as long as you wash them, washing them gets rid of any nastiness that could be on the outside.

But the core you do want to remove, the seeds release tiny amounts of cyanide when they’re chewed, you’d need to eat A LOT of apples to do yourself any harm but I prefer not to have any cyanide in my body thank you!

Now let’s keep going and go into some more detail.

Can you juice apple seeds or do you core them? 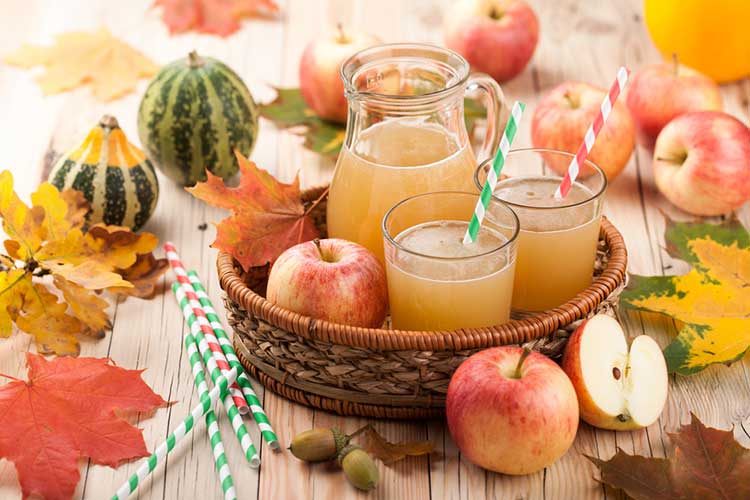 Apple seeds contain something called amygdalin which when chewed and digested turns in to cyanide! Now the amounts from a single apple seed are pretty minimal and small amounts can be detoxified in the body.

So how many apple cores would you need to eat to receive a fatal dose? You’d be looking at about 40 apple cores. Now that sounds like a lot (and it is) but if you juice a big glass of apple juice you’re going to use at least 5 apples, so before you know it you’re going to be eating an awful lot and not feeling great because of it!

This means if you’re just adding one apple to your juice a day you’re going to be fine juicing the whole apple core and all. But I’m a stickler and don’t want any amount of cyanide in my body so I always take the core out. This also removes the stalk which can alter the taste a little bit improving the overall juice.

Do you peel apples before juicing?

What about the peel? Should you peel an apple before you juice it or can you leave them as is?

Well, there’s a good rule of thumb when it comes to peeling and juicing, if you wouldn’t eat it, you probably don’t want to juice it. The exception is oranges which you can juice with the peel on, although some people prefer oranges peeled too, you can’t win!

Anyway, you can indeed leave your apples with peel on, you’ll just want to make sure you wash them first.

But more than that, the skin contains some unique vitamins and minerals including quercetin which works to improve lung capacity and performance, which is why as an asthmatic I always make sure to juice my apple whole!

How Do You Clean Apples For Juicing?

Now, this is an easy win, some people go over the top when it comes to washing their fruit and veg before juicing. People are making washing liquids out of all sorts of different kinds of vinegar but to me that’s overkill, you don’t need that much you just need a running tap.

You can cut out any of the gouges or bruises you see on the skin, they don’t wash off you can just chop them out before you juice them. You’d likely be fine juicing it all even if there were cuts or bruises on the outside of the apple but I like to have my apples clean and crisp going in so all those bits get cut out.

What type of apple is best for juicing?

I talked about this in a different article about the best apples for juicing but the long and short of it is you cannot go wrong with a gala apple if you’re making apple juice at home. They’ve got a delicious sweet flavour and you can get them fresh pretty much all year round.

But you can juice pretty much any type of apple, the only type you won’t want to make into juice are crab apples, they’re too tart, much better used in a chutney.

But if you like a tarter apple juice then you should try juice a granny smith apple, these mix it up and give you a unique flavor since it’s not a type of apple most people use to make juice.

How You Juice An Apple

I’ve got a bigger guide on making apple juice but I’ll take you through the quick version of preparing and juicing your apples.

Step 1. Wash the apples under the cold top giving them a good rub down to remove anything that might have come into contact with the outside of the fruit.

Step 2. Cut the apple into chunks around the core so you can fully remove all the seeds and the stalk leaving you with good size pieces that will fit into your juicer withou clogging it.

Step 3. Feed through your juicer taking your tie so you don’t over fill it and end up clogging your juicer! If you need a better juicer check out my apple juicer reviews here.

Step 4. Enjoy your juice! And make sure you clean your juicer straight away otherwise you’re going to have a lot more trouble cleaning it later!

And there you have it! You now know everything you need to know about preparing your apples for juicing, as the last sum up you don’t need to peel them, you do need to remove the core and to wash them you just need to run them under the tap and give them a good rub down.

Any questions feel free to leave me a comment below!