Juicing vs Eating – Is juicing better than eating?

I’ve seen some people arguing this point online, deciding whether or not it’s better to eat your fruit and vegetables or whether or not turning them into juice is better.

Team juice says that juicing allows for faster nutrient absorption so you get the nutrients faster and more effectively. But team whole fruit argue that without the fibre you’re not going to absorb anything.

Well in the juicing vs eating debate I don’t think either one is a clear winner, I think juicing is great because you can have large amounts of fruits and vegetables easily and effectively. I can get half a bag of spinach into a glass of juice but rarely will I sit down and eat that much. And you do still absorb nutrients because juice still has the soluble fibre which is how you absorb nutrients, it just doesn’t have insoluble fibre which is what your body uses to make poop.

I also I think eating fruit and vegetables is great, partly to hedge your bets in case your missing anything from the fibre, you shouldn’t be but science has been wrong before, but also to get some good insoluble fibre to keep your digestion running smoothly with the other things you eat.

Does Juicing Have Less Calories? 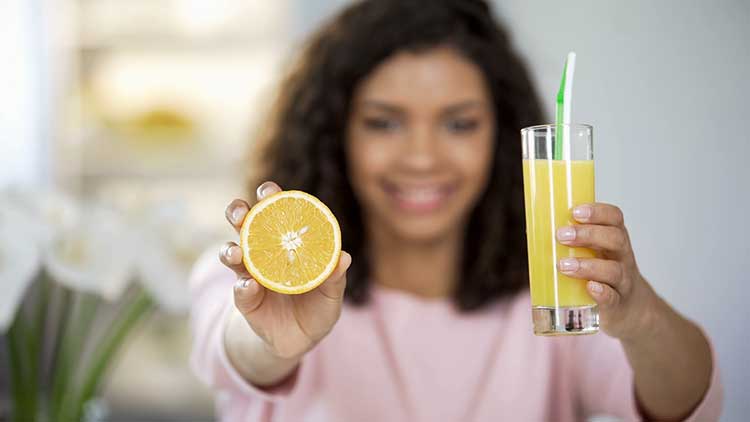 One reason you might want to juice is to have fewer calories, but with juicing it’s not entirely relevant. Because a juiced apple will have fewer calories because you’re ingesting less of it, the pulp in the bin has calories in it, though most of the calories are likely in the sugar in the juice.

But then if you’re juicing you have several apples and a bunch of other ingredients so it’s hard to judge the exact values. And it’s fruits and vegetables which are all generally low in calories anyway.

The worry of too much sugar seems strange to me too, it’s the debate of soda versus juice it’s irrelevant because soda is just sugar and flavourings but juice is packed full of vitamins and that’s why we’ve evolved for it to be tasty. It tastes sweet because it’s good for us!

Now that’s only if it’s proper 100% juice, cheap store-bought juice with lots of added sugar, of course, isn’t that great, but we like making our own juice right?

But if you’re worried at all about taking in too much sugar from juicing then stick to vegetables, they have fewer calories, less sugar and you can improve the taste with a knob of ginger and a quarter of a lemon. These work great with green juice to mask the bitterness leaving you with a tasty juice. Maybe not as tasty as a glass of orange juice or apple juice but it’s really good for you so you’ve got to go with it.

That’s one of the biggest differences in whether you’re eating or juicing vegetables, in juice you’re going to have them raw when often you wouldn’t likely otherwise.

So is it better to ingest your vegetables raw? I took a look at the science and it’s a mixed opinion, again it seems to be about balance because cooking vegetables kills off the vitamin C, it gets destroyed through oxidation which gets faster when the heat gets involved, and vitamin C dissolves in water.

But a study was done measuring Beta-carotene in carrots before and after cooking, and beta carotene got increased through cooking. And Beta carotene turns into vitamin A which is great for healthy skin, eyes and a healthy immune system.

Finally a different study was done that shows Broccoli is healthier when it’s raw, with higher levels of vitamins and minerals. Which is interesting because raw broccoli can give people bad bloating and stomach cramps which is why I don’t recommend that you juice it.

Pros of Juicing fruit and vegetables

There are a few different pros for juicing, I love juicing so I’ve tried not to be biassed, and don’t worry I still eat plenty of vegetables!

Bigger Quantities – That’s my favourite reason for loving juicing, you get so much more fruit and veg into your diet. I would never sit and eat half a bag of spinach, alongside three carrots two apples and an orange, it just wouldn’t happen. But put all that through a juicer and I can’t drink it fast enough!

It Varies What You Eat – This has been the case for me anyway, when I’m just cooking I tend to rotate through the same vegetables, carrots, broccoli, and bell peppers, those are the main vegetables I put in most dishes. But when I started juicing it opened up a whole new world, I started following recipes and varying massively what fruits and vegetables I was having in my diet.

It Saves Time – I wouldn’t say it’s a fast process by any means but for how much you have compared to preparing for a salad or even to roast veggies it’s much faster-making juice. And much faster drinking juice compared to eating breakfast or a snack. If you’ve got a cold press juicer your juice can last 2-3 days in the fridge, so if you batch up your juice you can have a super healthy snack ready to go in no time.

Less Fibre – You still get the soluble fibre which helps you absorb vitamins but you do miss out on the insoluble fibre which can help you maintain normal bowel movements. That’s another reason why it’s good to do both, eat some fruit and veg and juice the rest.

Pros of Eating Fruits and Vegetables

Whole fruits and vegetables do have their benefits, it can’t be argued!

Stay Full For Longer – This is the main one, eating the fibre keeps you feeling full for longer, so your appetite stays in check and you’re less likely to snack. The same goes for smoothies made in the blender too, having that extra fibre helps keep you full so having a load of fibre at breakfast might keep you full through to lunch better. But that comes at the cost of feeling full when you want to have more, more up to the point of a glass of juice.

But you can always eat a banana after your juice since you can’t juice them (or can you?) and that’ll give you the big nutrition hit from the juice and then the fibre from the banana will help keep you full. A nice balance I think.

Better Poopin’ – Everybody poops! But if you want to keep your poop happy you’re going to want to get enough fibre, more than you’ll get from juice. Eating fruits and vegetables raw or cooked is the easiest and best way to get more fibre into your diet, which again is why I say you should do both, eat some drink some, and why not put some in cocktails!

But yes you need insoluble fibre so make sure you’re getting enough. It can be a bit different when you’re doing a juice fast but that’s a different circumstance.

Cons of Eating Fruits and Vegetables

I hesitate to put anything here, because you should eat fruit and veg, in my mind, no argument means you shouldn’t eat vegetables. So the cons here are compared to juicing but you should still do both.

You Fill Up Too Quick – Bit of a weird one but I mean you fill up too quickly and can’t eat more fruits and vegetables. For instance, I seem to get unreasonably full when I eat spinach, I’ll have a bowl of spinach as a side salad and halfway through it, I feel like I can’t eat another bite. But put double that amount of spinach in a juicer and I’ll drink it down no problem.

I don’t think one is necessarily better than the other. They both have their advantages and they have their disadvantages and I think balance is key. If you drink a lot of juice then try having some whole fruits sometimes to mix it up. Likewise, if you never drink juice then give it a go. I’m a big fan of both and will continue to enjoy my daily juice while still having a big portion of vegetables with my dinner and a banana in my protein smoothie.