Juicing is a fast and effective way to get a lot of nutrition into your diet.

Because who is going to eat a huge salad for breakfast?

Not many people, but put all the parts into a juicer and you can drink a sweet fruity salad for breakfast and start your day right with a load of nutrients, vitamins, minerals and other good stuff.

But how do juicers work?

I’ll go into more detail below but basically you’ve got two types of juicer that each work a little differently, masticating juicers works by squeezing the produce and letting the juice pass through a filter below while the pulp gets pushed through the end. The other type is a centrifugal juicer which works using a high speed spinning cutting blade that mulches the produce and throws it out against a filter that catches the pulp and lets the juice pass through.

That’s the simple version, I’ve got more information below on each type, which is best and a comparison of juicing to blending. I’ve also talked more about the differences between the two types in this article. 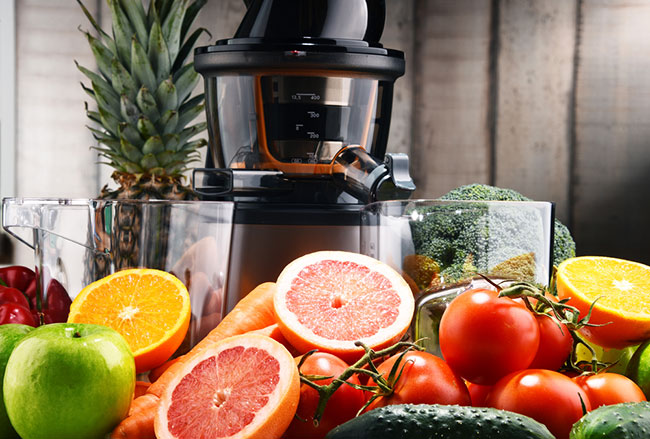 How Does A Masticating Juicer Work

As I said above masticating juicers work by squeezing out the juice, or masticating it (think of chewing something and all the juice running out).

They’re great because the juice it makes lasts longer, it can stay fresh up to 3 days if it’s kept in a clean bottle in the fridge, I’ve got my favourite bottles here. This means you can batch make your juice which saves a lot of time in clean up.

After all if you juice twice a day for three days that’s washing everything six times compared to washing it all once. I know which I’d rather do! Although my tiny fridge hinders me slightly in doing this myself…

They’re also a lot quieter, much quieter than a blender for scale, so they’re a bit more pleasant to use in the kitchen. Anyone else in the house won’t have to cover their ears and your pets won’t have to run off and hide.

But it’s not all sunshine and roses, masticating juicers have smaller feed chutes so you’re going to have to do more prep before hand, more chopping up your veg into smaller pieces so you can feed it through the juicer easier. And I know you’ll want to try and jam in something bigger than your supposed to so you can save time but trust me, it will jam.

My favourite type of juicer and you can read about my favourite masticating juicers here.

How Does A Centrifugal Juicer Work

Now, they might both make juice but they definitely don’t work the same way. Centrifugal juicers use centrifugal force to make juice, there’s a blade spinning at up to 15,000 rpm that rips apart the fruit separating the juice from the pulp.

The mashed up fruit and vegetables get thrown against a mesh, using centrifugal force, hence the name, at very high speeds and the juice gets squeezed out while the pulp gets caught and falls down and out of the juicer into a pulp collection container. (More on using juice pulp for those interested)

These are called fast juicers because yes they are a lot faster.

But, the time you save juicing could have been saved in preparing ahead with a masticating juicer, because juice from a centrifugal juicer will only last about 24 hours.

It’s been heated up and oxidized which causes it to degrade faster than masticated juice, so it loses minerals, some while being juiced but definitely loses them faster over time after you’ve finished juicing, even in a sealed bottle in the fridge.

Oxidizing is what happens if you chop an apple in half and leave it so it starts turning brown. That brownness is the fruit starting to oxidize from being exposed to the air.

You also, unfortunately don’t get the same yield you do from a masticating juicer either, your pulp comes out a little wetter, and you can put it back through which helps but then you lose the time you save using a fast juicer in the first place.

But the produce you use doesn’t need to be chopped up as small so you save some time in the act of juicing as well as in the prep.

Some people love a centrifugal juicer but I personally prefer a masticating juicer, which probably comes across in where I focused on the advantages and disadvantages!

But what about blending? Is there a difference?

I’ve gone into it in more detail in a different article but I’ll give you the briefer overview here.

Blending can be good because the fibre keeps you full, so a smoothie for breakfast will keep you feeling full for longer so you’re less likely to snack, which I think can be a good thing, I tend to have a protein smoothie for breakfast (protein blenders reviewed here) and a juice afterwards, alongside a coffee actually so most of my morning is in fact spent peeing!

But, if you suffer from IBS or you have digestion troubles then you’ll definitely want to try juicing, much easier to digest and you the nutrients get absorbed faster. You can have a big glass of juice with a rainbow of fruits and vegetables inside and you do start feeling better almost straight away. Especially if I’ve not been eating great, I get that big ol glass of goodness and feel wonderful afterwards.

Why Is Juicing Good For you

The reason people prefer juicing is you get the majority of the nutrition from a piece of vegetable or fruit and you don’t get full. So you can wolf down your 5 a day in a drink, no full feeling, no forcing down more food when your full, and you get all the nutrition. So it’s a really easy way to get more fruit and veg into your diet.

You can juice a big bag of spinach and mix it with some other ingredients to make it tasty and drink it down in no time. But eating a big bag of spinach? I know I’m not going to do that any time soon, even if I eat an apple after or an orange alongside it.

Plus it’s a really low calorie way to get a big hit of nutrients, so you can have less to eat over a day but still feel really good. That’s why people go on juice cleanses, you can lose weight because you’re having a lot less calories than normal but you still get loads of nutrition which can keep your energy levels up. You still feel hungry but you’re not nearly as sluggish.

As an aside I respect people who do the crazy 100-day juice fasts but it’s not something I’m a huge fan of or recommend. 24 hours up to a few days is fine because fasting is meant to be very good for you in general so I see no reason why a juice fast would be any different.

Juicers work by separating the juice from the pulp so you can quickly and easily get all the nutrition from the produce you’ve put in.

Masticating juicers have a slow spinning auger that crushes up whatever you’ve put in squeezing out the juice.

Centrifugal juicers on the other hand work by an extremely fast cutting disk that mulches up your produce and flings the juice out to the side.

Both leave you with two jugs, one full of pulp which you can compost and the other full of sweet delicious healthy juice. Check out my article on whether or not you can make juice in a blender next.