Rhubarb is a peculiar vegetable commonly known for its use as pie filling. But there are other ways you can enjoy this celery-like herb. Have you ever had a taste of rhubarb juice?

Juicing rhubarb is one of the unique ways of preparing this stem vegetable. To make tasty rhubarb juice, you can follow one of two recipes. One involves using a juicer while the other requires you to boil the rhubarb stems. Either way, the results are a delicious pinkish rhubarb brew.

Knowing how to make rhubarb juice can add to your arsenal of tasty and healthy drink recipes. That’s why we’ve gone ahead to outline the nutritional benefits of this plant, its health benefits, and the recipes for making rhubarb juice. Read on. 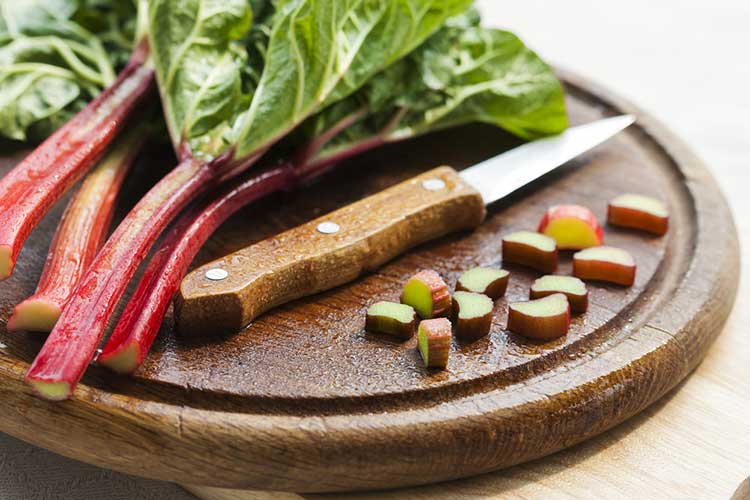 Rhubarb is a vegetable that grows in cold weather climates. It has a tart and very tangy taste hence why it’s rarely eaten raw. However, this flavor works well in pies and is probably one of the reasons rhubarb is often used as a pie filling. No wonder its nickname, “pie plant.”

But even when cooked, you’ll need to add a ton of sugar to reduce the tangy taste. It’s also common practice to mix rhubarb with strawberries to make the strawberry rhubarb pie. If you don’t know how to make that, watch this video for well-detailed instructions:

But rhubarb is not only good for pie. It also makes a delicious drink, rhubarb juice. This is pretty easy to make and takes just a few minutes to prepare. The taste is amazing and interestingly sweet despite rhubarb being such a tart vegetable.

One interesting fact about rhubarb is that, while botanically, it is a vegetable, legally, it’s considered a fruit. You see, in 1947, a New York court declared it a fruit because of its popular use as one in most households. But whether fruit or vegetable, rhubarb is a healthy food plant.

In markets and grocery stores, rhubarb is sold by the stalk, similar to celery. In fact, the stem is the only edible part of the plant. The leaves of rhubarb can be poisonous because of their high levels of oxalic acid, and that’s why you should never eat them.

The stalks are either light pink, dark pink, red or light green. These colors are not indicators of how ripe or sweet the vegetable is, but when buying, go for the soft, bright-looking stalks that are fresh. You’ll make a yummy and pretty pink brew out of them.

It’s interesting how most of us, especially kids, have to be coerced into eating our vegetables. But the knowledge of all the nutritional goodness found in herbs should be incentive enough to make us take those 3-4 servings in a day.

Rhubarb is one of those vegetables that are highly nutritious as well as delightfully tasty. It’s like having the best of both worlds wrapped up in that one stalk.

To begin with, rhubarb is a good source of fiber. The amount of fiber you get is similar to that in oranges, celery, and apples.

Rhubarb is low in saturated fats and sodium. It has very low cholesterol levels.

Considering the many nutrients in rhubarb, this vegetable (or fruit) has a number of health benefits. These include:

One of the important minerals in bone development is calcium. This mineral is contained in abundance in rhubarb. In addition, vitamin K, which is also found in rhubarb, also helps bone growth and development. Therefore, people suffering from osteoporosis or other bone-related issues can benefit greatly from drinking rhubarb juice.

Rhubarb can prevent premature aging by fighting free radicals in the body using the antioxidants it contains. Signs of aging like sagging skin and wrinkles can also be delayed by vitamin C, one of the vitamins found in rhubarb juice.

Other important nutritional components found in rhubarb juice are the antioxidants, which, by fighting the formation of free radicals, help protect brain health. This was confirmed by researchers who demonstrated the protective property of rhubarb extract against irradiation-induced neuronal cell death.

Rhubarb has extensive healing properties, especially due to its antioxidant content. Research shows that rhubarb extract can reduce the risk of infection of an incision site by promoting healing. This happens due to the anti-inflammatory nature of rhubarb and its ability to enhance angiogenesis and promote blood circulation.

How to Make Rhubarb Juice

Juicing rhubarb is a quick and easy process. Let’s look at two recipes you can use to make your own rhubarb juice.

Rhubarb is a healthy stem vegetable that’s commonly cooked in pie as the filling. But apart from that, rhubarb can also be consumed in juice form. You can boil the stalks or juice them to form a delicious pink extract.

Rhubarb is a good source of vitamin K, A and C, antioxidants, fiber, and a number of minerals.

The health benefits of rhubarb are numerous. Some of these benefits include anti-inflammation, slowed aging, enhanced digestive health and eye health, strengthening bones, preventing Alzheimer’s, and boosting immunity. With this, it’s clear that rhubarb juice is not only a tasty drink but a healthy one as well.