When you have an excess of a food product, freezing is the go-to method for keeping the extra food safe until you can use it. Often when looking to preserve something for the first time, such as extra almond milk, we can find ourselves unsure if it’s even safe to do. It can be a tricky question, but the answers are right at the tips of our fingers.

As we did the research on if almond milk could be frozen, especially if it could be done safely, we found a few new ways to enjoy its benefits regardless of how it might change after being frozen. In fact, we found we enjoyed these new suggestions even more than simply drinking it before freezing! Below, we have gathered all the information you need to safely freeze almond milk to enjoy later. This applies to all nut milks. 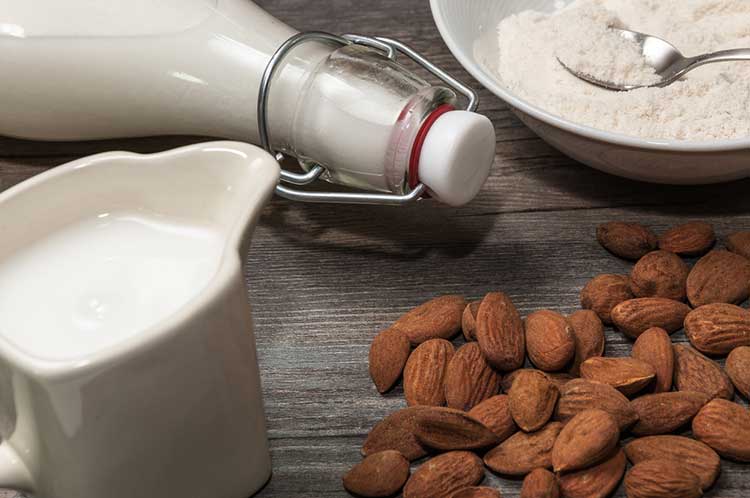 But is it Really Safe to Freeze Almond Milk

According to the USDA website, almost any and all food can be frozen safely. Only canned foods and eggs still in shells are listed as not being safe. With other products like almond milk, the risk of bacteria comes in if the defrosting is done improperly, or if the temperature isn’t maintained correctly. As long as you keep it frozen the right way and take care when you thaw almond milk, almond milk is entirely safe to use after freezing.

The best and safest way to defrost almond milk, like with most other frozen foods, is by moving it to the refrigerator. It may be slower, but it’s the absolutely safest way. With some caution, you can thaw the almond milk by using a cold water method, but any leaks in the container or the water being too warm increases the dangers of bacteria, and all of it must be used immediately.

The very last resort to defrost the almond milk, as when defrosting anything, is in the microwave. But this method can easily overheat and ruin the almond milk, and it will also need to be used right away. The goal is to unfreeze and reheat it as even of a temperature as possible, which is why the fridge is safest to thaw anything.

You should never use other methods to thaw almond milk, or any other frozen food for that matter. Leaving it on the kitchen counter or somewhere outside makes it unsafe to eat. You also need to use extreme caution when refreezing the almond milk, it’s best to only freeze it once and use it within 3-5 days.

Freezing almond milk isn’t dangerous by itself, letting it get too warm in the wrong ways is what puts it, and any frozen food, at risk. You also shouldn’t refreeze almond milk.

So, is Freezing Almond Milk for You

While it’s entirely safe to freeze almond milk, you still need to consider how you plan to use it before you actually put it in the freezer. Of course, you could simply mix or blend it and drink teh thawed almond milk, but there’s no telling how well it’ll turn out each time, and it still won’t be like it was before. The best use of frozen almond milk is to put it in a recipe rather than drink it alone.

By adding the homemade almond milk to a dish or even a drink, it’s altered qualities are quickly covered up and forgotten. There are plenty of recipes that include almond milk as an ingredient, from healthy smoothies to savory soups, all that would mask any change the milk undertook from freezing.

The possibilities are endless, allowing you to still enjoy the benefits of homemade almond milk regardless of how it looks after being frozen. Any recipe you find interesting can work with the frozen milk.

Once you decide if freezing the almond milk is something you want to try, you can pick a method for doing it. Freezing it in its original carton isn’t a great idea, there’s not enough room for it to expand and it could cause a leak. There are many good options when freezing almond milk, even some that can make future recipes easier, too. If it can be sealed in some way, it’ll work fine. Just remember to leave some space!

What Freezing Method Should be Used

It’s best to pour the milk into a new container for freezing. Depending on your plans for the almond milk, you have a few options:

Freezing almond milk in an ice cube tray is a perfect idea. just make sure you can either fit a ziplock bag over the tray or move the frozen almond milk cubes to a sealed container once they’re solid, so they don’t absorb flavors from other frozen foods around them.

You can pop a few almond milk cubes into a cup for iced coffee, or even use them instead of regular ice cubes when making a smoothie. And with them being smaller, it’s easier to defrost them in the fridge or even let them melt into a cooking soup.


You can freeze the milk in airtight containers, too. This is especially helpful if you need a specific measurement for a later dish, as it’s already the correct amount. If you know how much a recipe calls for, just measure out the almond milk and stack it in the freezer. An erasable marker would be handy to label the containers with different amounts for separate dishes, too.


Same as with the tupperware, you can easily use a ziplock freezer bag to freeze large amounts of almond milk as you please, or measure exact amounts to use later. Writing the measurements on the bag is still a good idea, too. Plus, using these plastic bags makes cleaning up a little faster since you just toss them out when they’re empty!

Any of these suggestions will work. These different ideas really only help make it easier for different uses later. As long as it’s sealed up, and you leave a wiggle room of space, your fresh almond milk is ready to be frozen in any new container.

Why Does Everyone Say No if it’s Safe

Typically, companies seem to focus heavily on sales and profits above all else. Safety matters to them too of course, because they wouldn’t want people getting sick after using their product or the blame could be placed on them.

But they become more concerned over how the product is in its usual state, wanting to keep their almond milk looking nice and tasting normal so they can keep selling it. Naturally, they’re going to suggest against anything that alters its default form. They wouldn’t want to risk their reputation if the separated milk makes consumers worried they’ll get sick from it and puts them off buying it.

As for other consumers, they couldn’t possibly know if freezing might alter the fresh almond milk dangerously or not. In many other articles, we can see the trend of just saying no runs strong. With companies suggesting not to freeze it, as the physical state will be changed, they can only assume it’s for a legitimate concern. Since it’s better to play it safe and cautious with food illnesses, many people simply say not to freeze almond milk to avoid any possible risks with it.

The truth of it all is, if you freeze almond milk it is no more dangerous than freezing any other consumable. Be as safe and careful with it as you are when freezing anything else, but absolutely freeze it if you want to.

However, it’s also very important to remember that the shelf life of defrosted food is reduced by about half, regardless of what the frozen food is. If it was opened before being frozen, it doesn’t last as long as it would if kept sealed. With frozen almond milk, it’s expiration date is closer to 3 days than 7. If after a couple days it seems spoiled, such as having a sour smell or curdled clumps, toss it out.

Why Does it Look so Different Now

While the long answer to can you freeze almond milk is still a “yes”, it does come with some things to consider. You see, thawed almond milk seperates, The texture changes, losing its silkiness as the liquid divides. Defrosted almond milk also looks unappealing and discolored. The taste isn’t as flavorful as it normally would be, either. It’s altered flavor and appearance aren’t the only things to keep in mind, it’s shelf life is also shorter, too.

Because of these changes, consumers and companies alike strongly recommend against freezing it, though their opinion has nothing to do with safety. Blue Diamond, for example, says in their FAQ: “Freezing Almond Breeze causes the product to separate irregularly and greatly reduces the consistency of the product upon thawing.” They don’t mention if it’s unsafe or not, their concern is the presentation of their product more so than it’s safety.

Nevertheless, other than the weaker taste and poor aesthetic, Seperated thawed almond milk is fine and safe to consume. It’s a good idea to decide how you want to use the almond milk before you freeze it, and to plan for its new shelf life to be shorter after defrosting. Once you know what you’re going to do with the defrosted milk, you can absolutely freeze it safely.

You should of course never freeze spoiled almond millk, which you can tell by taste or smell. Freezing should also always be done in some sort of freezer safe airtight container so as not to cross contaminate. And if your thawed almond milk changes texture that’s not necessarily a bad sign. Your almond drink should still be A-okay.

It should also be pointed out that frozen liquid expands so make sure you leave some space in your container. And the best way to defrsost it is to leave it in the fridge overnight. Or you can use use frozen almond milk straight from the freezer in some recipes. Just take it out the ice cube tray and pop it in your drink.

Whatever plant-based milk you use, let it completely melt before you drink it. Completely defrosted is the only amount of defrosted you want to deal with. And for best results freeze either an un opened carton or with fresh almond milk freeze it ASAP.

My Name is Mia Young and I run Juice Buff, your go-to place for juicing info. I;'ve been a professional at home juicer for 7 years now and I work hard to bring you all the best reviews and info about everything to do with juicing, juicers and blenders. Shoot me an email at [email protected] if you want to chat. Or check out the about page for more info.

Want to get in touch?

Email me personally at [email protected]